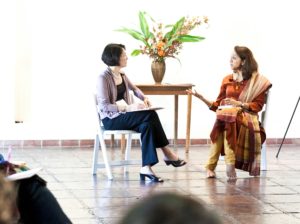 I love to embark on learning journeys and to invite others to join me.

Over 25 years I’ve coached Nobel laureates, Olympic medalists, television celebrities, physicians, rocket scientists, university chancellors and leaders of all ilks — from CEOs and presidents to the chief of a Native American tribe.

I’ve conducted trainings on Wall Street, in a semiconductor plant, in the Tsing Tao Beer factory and a Napa Valley winery.   My clients have ranged from Apple to Disney to the venture capital arm of the CIA.

Having lived and worked in Asia, Africa, Europe, Canada and the US, I bring a global perspective to my work.  I grew up speaking English and three dialects of Chinese and am a student of French, German and Spanish.

As a leadership coach, I’m gently and ruthlessly committed to your power and effectiveness.

Before I started my own practice, I led the communications training division for Burson-Marsteller, one of the world’s largest PR firms, in the Greater China region.  I also worked in HR at American Express International.  I began my career teaching in universities in Asia and the US.

As a lifelong learner, I believe in the power of a multi-disciplinary approach.  I’ve studied extensively the fields of leadership, neurolinguistic programming, Jungian archetypes, somatic coaching, metaphysics and movement forms such as Nia.  I received my coach training in 1997 from the Coaches Training Institute and have a master’s degree in Linguistics from the University of Montana.

Karen is without a doubt the most effective communication trainer and coach with whom I have interacted.  Her greatest strength is getting quickly to the heart of the real issue — whether it’s about leadership skills, motivations, or presentation styles.  She communicates with a gentle regard for the individual, but with a firm focus on helping you grow.  Her ability to share her insights clearly and honestly is invaluable.

I count Karen as one of the many blessings I have been given. She is a gift.